Since the debut of The Amazing Spider-Man in 1962, Marvel Comics has released numerous versions of the fictional superhero that includes male, female, and multi-species variations. The spider-based heroes have included a wide variety of iterations, from pigs, monkeys, aliens, and humans. Peter Parker’s Spider-Man has gone through several identities, some of which have been around for a while, like Spider-Woman. And it may come as a surprise to most to learn that Marvel’s first ever Spider-Woman was a Black woman known as Valerie the Librarian. 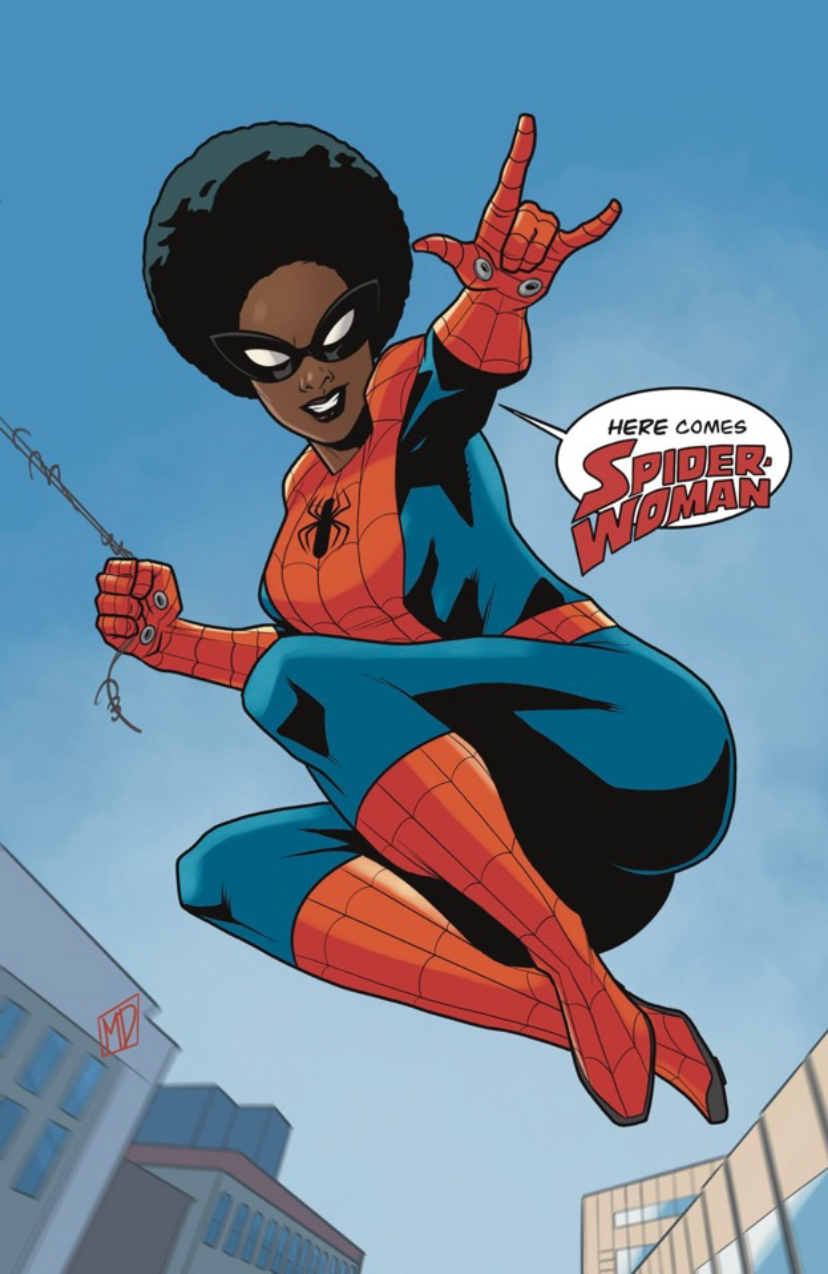 Valerie made her debut in 1974 in issue #6 of Spidey Super Stories, a promotional comic created by Marvel and the PBS TV show, The Electric Company. As a librarian, Valerie witnessed Spider-Man protect her city from numerous low-level criminals, such as Vanisher and April Fool. She then is inspired to help Spider-Man by defeating a literal bookworm destroying books in her library [Spidey Super Stories #6, 7, 10 March 1974-July 1975]. After this encounter, she decides she wants to become a superhero too. As fate would have it, she soon acquires her own Spider-Woman suit.

After successfully stopping Vulture from robbing a jewelry store, Peter sunbathes on a rooftop. He accidentally drops his suit down below and into the hands of Valerie. She decides to put it on and after wearing it a while, she learns how to operate it. She learns of the web shooters that come with the suit and alters it at home with suction cups so that she can climb walls. She then identifies herself as Spider-Woman and hits the streets with the Friendly Neighborhood Web-Slinger to defend New York.

While looking for his missing costume, Spider-Man comes across the newly self-proclaimed Spider-Woman practicing her wall-crawling. Valerie convinces Peter that two Spider-People are better than one and he agrees to let her assist him. Immediately thereafter, The Vulture launches his second attack, capturing Spider-Man, and Valerie rises to the occasion. Spider-Woman was able to overpower the Vulture and releases Spidey from his trap by arriving just in time. The two Spider-Heroes capture the Vulture with a double-web takedown, foiling his last-ditch attempt to flee, and hand him over to the authorities [Spidey Super Stories #11, August 1975]. As the first Black female superhero in Marvel Comics, Valerie the Librarian briefly served as Spider-Woman. Only four Black superheroes were introduced between the introduction of Black Panther in 1966 and Valerie's debut as a heroine in 1974. Stan Lee, famed Marvel comic writer, apparently had reservations about publishing Black superheroes in the 1960s due to the civil rights movement, even though he wanted to develop characters from diverse backgrounds.

Despite being a new hero for his time, Black Panther relied on stereotypes about native African culture as it was perceived by Westerners at the time: mysterious and magical, loosely uniting all of Africa under a single civilization. While Black Panther did frequently challenge notions of contemporary colonialism and fight back against overtly racist tropes, it stopped short of providing a realistic portrayal of Black people. Years later, during the controversial Blaxploitation era of Hollywood, which employed what some consider to be harmful tropes of Black culture, is when Luke Cage was first introduced to audiences. Although Cage was intended to be a sincere exploration of Black American culture, it's difficult to deny that it initially belonged to that offensive genre.

Black Panther and Luke Cage contrast sharply with Valerie, on the other hand who has a realistic, thoughtful story that establishes her as a young educator who wants nothing more than to keep her neighborhood safe. Valerie stands out from these instances because she doesn't conform to stereotypes; instead, she is an educated woman who aspires to be a hero. She dispels many of the negative assumptions about Black people in the media from the 1970s through her timeless, genuine, and enduring story.

Considering the popularity of Spider-Verse stories over the past few years, Spider-Man and his peers have been intricately linked to the Multiverse. Given that Marvel has started embracing diversity across its comic series, Valerie the Librarian is a fantastic contender to make an upcoming cameo in The Spider-Verse. A Black educator from the 1970s assuming the role of Spider-Hero might be a tremendous boost for Marvel by providing today’s fans with a glimpse into a progressive period for the legendary Web-Slinger and demonstrating that the superhero has a diverse history. Although Valerie the Librarian's time as Spider-Woman was brief, it was groundbreaking and unlike any other modern hero origin story. In the future, we would love to see Valerie the Librarian reappear alongside Spider-Man given the ongoing success of the Spider-Verse series and the growing demand for more diverse, distinctive heroes.